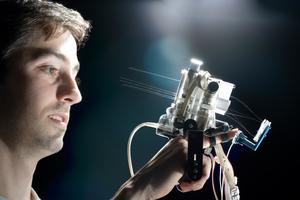 Wearable haptic devices have seen growing interest in recent years, but providing realistic tactile feedback is not a challenge that is soon to be solved. Daily interactions with physical objects elicit complex sensations at the fingertips. Furthermore, human fingertips exhibit a broad range of physical dimensions and perceptive abilities, adding increased complexity to the task of simulating haptic interactions in a compelling manner. However, as the applications of wearable haptic feedback grow, concerns of wearability and generalizability often persuade tactile device designers to simplify the complexities associated with rendering realistic haptic sensations. As such, wearable devices tend to be optimized for particular uses and average users, rendering only the most salient dimensions of tactile feedback for a given task and assuming all users interpret the feedback in a similar fashion. We propose that providing more realistic haptic feedback will require in-depth examinations of higher-dimensional tactile cues and personalization of these cues for individual users. In this thesis, we aim to provide hardware and software-based solutions for rendering more expressive and personalized tactile cues to the fingertip.

We first explore the idea of rendering six-degree-of-freedom (6-DOF) tactile fingertip feedback via a wearable device, such that any possible fingertip interaction with a flat surface can be simulated. We highlight the potential of parallel continuum manipulators (PCMs) to meet the requirements of such a device, and we refine the design of a PCM for providing fingertip tactile cues. We construct a manually actuated prototype to validate the concept, and then continue to develop a motorized version, named the Fingertip Puppeteer, or Fuppeteer for short. Various error reduction techniques are presented, and the resulting device is evaluated by analyzing system responses to step inputs, measuring forces rendered to a biomimetic finger sensor, and comparing intended sensations to perceived sensations of twenty-four participants in a human-subject study.

Once the functionality of the Fuppeteer is validated, we begin to explore how the device can be used to broaden our understanding of higher-dimensional tactile feedback. One such application is using the 6-DOF device to simulate different lower-dimensional devices. We evaluate 1-, 3-, and 6-DOF tactile feedback during shape discrimination and mass discrimination in a virtual environment, also comparing to interactions with real objects. Results from 20 naive study participants show that higher-dimensional tactile feedback may indeed allow completion of a wider range of virtual tasks, but that feedback dimensionality surprisingly does not greatly affect the exploratory techniques employed by the user.

To address alternative approaches to improving tactile rendering in scenarios where low-dimensional tactile feedback is appropriate, we then explore the idea of personalizing feedback for a particular user. We present two software-based approaches to personalize an existing data-driven haptic rendering algorithm for fingertips of different sizes. We evaluate our algorithms in the rendering of pre-recorded tactile sensations onto rubber casts of six different fingertips as well as onto the real fingertips of 13 human participants, all via a 3-DOF wearable device. Results show that both personalization approaches significantly reduced force error magnitudes and improved realism ratings.

Biography: Eric Young is a Ph.D. candidate at the University of Pennsylvania advised by Katherine J. Kuchenbecker. His research interests include wearable haptic interfaces, mechatronic design, and virtual haptic interactions. He received his B.E. degree in mechanical engineering and mathematics and his M.S. degree in mechanical engineering from Vanderbilt University in 2015.