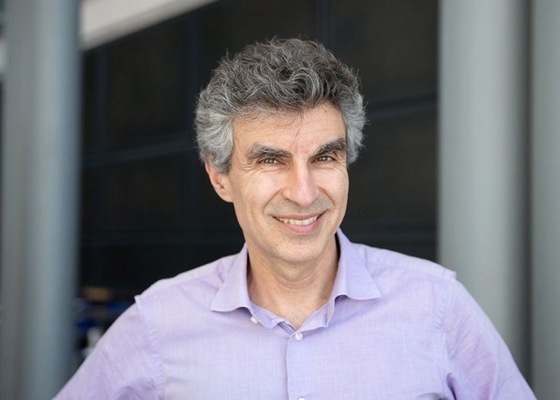 Yoshua Bengio is a pioneer of deep learning, and one of the world's most cited scientists in the field.

This year's lecture is being held online on June 23

Stuttgart – Yoshua Bengio, the multiple award-winning computer scientist, will hold the Max Planck Lecture 2020 with a talk entitled “Machine Learning for COVID-19 Risk Awareness from Contact Tracing”.  Hosted by the Max Planck Institute for Intelligent Systems (MPI-IS), the lecture will be taking place this coming Tuesday, June 23, at 5:30 p.m. (CEST).

Bengio is a pioneer in the field of research that has given machines the ability to learn. Along with a handful of other outstanding scientists, Bengio is widely considered one of the “Godfathers of AI”. In 2019, he shared the Turing Prize with Geoffrey Hinton and Yann LeCunn for his contributions to making deep neural networks a critical component of computing. The Turing Award is considered the Nobel Prize of computer science.

“For decades, Yoshua Bengio has driven the research field of deep learning and machine learning forward and supported many others in doing so. We are deeply honored to have him hold this year’s Max Planck Lecture,” said Bernhard Schölkopf, Director at the MPI-IS in Tübingen, also on behalf of his co-directors and co-hosts Katherine J. Kuchenbecker, Michael J. Black, and Metin Sitti.

The Max Planck Lecture is held annually by prominent scientists and leaders in their respective fields. The event is designed to be accessible to a wide audience, from scientists, industry practitioners, and government decision makers, to interested members of the general public.

Yoshua Bengio has been a professor in the department of Computer Science and Operational Research at the Université de Montréal since 1993. In addition to holding the Canada Research Chair in Statistical Learning Algorithms, he is the founder and scientific director of Mila, the Quebec Institute of Artificial Intelligence, the world’s largest university-based research group in deep learning. In 2018, Yoshua Bengio ranked as the most cited computer scientist worldwide.

Yoshua Bengio has been a professor in the department of Computer Science and Operational Research at the Université de Montréal since 1993. In addition to holding the Canada Research Chair in Statistical Learning Algorithms, he is the founder and scientific director of Mila, the Quebec Institute of Artificial Intelligence, the world’s largest university-based research group in deep learning.

In 2018, Yoshua Bengio ranked as the most cited computer scientist worldwide. He is a member of the NeurIPS board and co-founder and general chair for the ICLR conference, as well as program director of the CIFAR program on Learning in Machines and Brains. In 2020 he was nominated Fellow of the Royal Society of London.

The Covid-19 pandemic has spread rapidly worldwide, overwhelming manual contact tracing in many countries and resulting in widespread lockdowns for emergency containment. Large-scale digital contact tracing (DCT) has emerged as a potential solution to resume economic and social activity without triggering a second outbreak. Various DCT methods have been proposed, each making trade-offs between privacy, mobility restriction, and public health.

Many approaches model infection and encounters as binary events. With such approaches, called binary contact tracing, once a case is confirmed by a positive lab test result, it is propagated to people who were contacts of the infected person, typically recommending that these individuals self-quarantine. This approach ignores the inherent uncertainty in contacts and the infection process, which could be used to tailor messaging to high-risk individuals, and prompt proactive testing or earlier self-quarantine. It also does not make use of observations such as symptoms or pre-existing medical conditions, which could be used to make more accurate risk predictions.

While methods that may use such information have been proposed, these typically require access to the graph of social interactions and/or the centralization of sensitive personal data, which is incompatible with reasonable privacy and security constraints. We use an agent-based epidemiological simulation to develop and test machine learning methods that can be deployed to a smartphone to locally predict an individual's risk of infection from their contact history and other information, while respecting strong privacy and security constraints. We use this risk score to provide personalized recommendations to the user via an app, an approach we call probabilistic risk awareness (PRA). We show that PRA can significantly reduce the spread of the disease compared to other methods, for equivalent average mobility and realistic assumptions about app adoption, and thereby save lives.

To watch the live transmission of the 2020 Max Planck Lecture, please visit our youtube channel on Tuesday, June 23, at 5:30 p.m (CEST).