Machine Learning Journal, May 2020 (article) Submitted
Abstract
When making decisions, people often overlook critical information or are overly swayed by irrelevant information. A common approach to mitigate these biases is to provide decisionmakers, especially professionals such as medical doctors, with decision aids, such as decision trees and flowcharts. Designing effective decision aids is a difficult problem. We propose that recently developed reinforcement learning methods for discovering clever heuristics for good decision-making can be partially leveraged to assist human experts in this design process. One of the biggest remaining obstacles to leveraging the aforementioned methods for improving human decision-making is that the policies they learn are opaque to people. To solve this problem, we introduce AI-Interpret: a general method for transforming idiosyncratic policies into simple and interpretable descriptions. Our algorithm combines recent advances in imitation learning and program induction with a new clustering method for identifying a large subset of demonstrations that can be accurately described by a simple, high-performing decision rule. We evaluate our new AI-Interpret algorithm and employ it to translate information-acquisition policies discovered through metalevel reinforcement learning. The results of three large behavioral experiments showed that the provision of decision rules as flowcharts significantly improved people’s planning strategies and decisions across three different classes of sequential decision problems. Furthermore, a series of ablation studies confirmed that our AI-Interpret algorithm was critical to the discovery of interpretable decision rules and that it is ready to be applied to other reinforcement learning problems. We conclude that the methods and findings presented in this article are an important step towards leveraging automatic strategy discovery to improve human decision-making.

Behavioral and Brain Sciences, 43, E27, March 2020 (article)
Abstract
The commentaries raised questions about normativity, human rationality, cognitive architectures, cognitive constraints, and the scope or resource rational analysis (RRA). We respond to these questions and clarify that RRA is a methodological advance that extends the scope of rational modeling to understanding cognitive processes, why they differ between people, why they change over time, and how they could be improved.

Learning to Overexert Cognitive Control in a Stroop Task

Febuary 2020, Laura Bustamante and Falk Lieder contributed equally to this publication. (article) In revision
Abstract
How do people learn when to allocate how much cognitive control to which task? According to the Learned Value of Control (LVOC) model, people learn to predict the value of alternative control allocations from features of a given situation. This suggests that people may generalize the value of control learned in one situation to other situations with shared features, even when the demands for cognitive control are different. This makes the intriguing prediction that what a person learned in one setting could, under some circumstances, cause them to misestimate the need for, and potentially over-exert control in another setting, even if this harms their performance. To test this prediction, we had participants perform a novel variant of the Stroop task in which, on each trial, they could choose to either name the color (more control-demanding) or read the word (more automatic). However only one of these tasks was rewarded, it changed from trial to trial, and could be predicted by one or more of the stimulus features (the color and/or the word). Participants first learned colors that predicted the rewarded task. Then they learned words that predicted the rewarded task. In the third part of the experiment, we tested how these learned feature associations transferred to novel stimuli with some overlapping features. The stimulus-task-reward associations were designed so that for certain combinations of stimuli the transfer of learned feature associations would incorrectly predict that more highly rewarded task would be color naming, which would require the exertion of control, even though the actually rewarded task was word reading and therefore did not require the engagement of control. Our results demonstrated that participants over-exerted control for these stimuli, providing support for the feature-based learning mechanism described by the LVOC model. 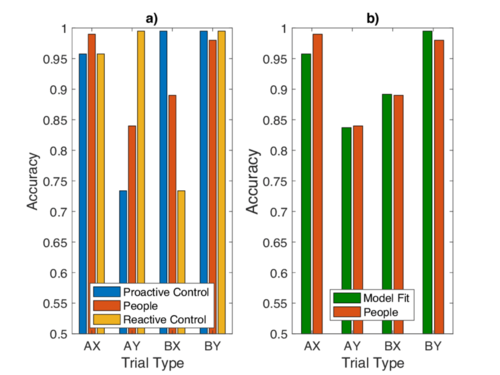 Toward a Formal Theory of Proactivity

January 2020 (article) Submitted
Abstract
Beyond merely reacting to their environment and impulses, people have the remarkable capacity to proactively set and pursue their own goals. But the extent to which they leverage this capacity varies widely across people and situations. The goal of this article is to make the mechanisms and variability of proactivity more amenable to rigorous experiments and computational modeling. We proceed in three steps. First, we develop and validate a mathematically precise behavioral measure of proactivity and reactivity that can be applied across a wide range of experimental paradigms. Second, we propose a formal definition of proactivity and reactivity, and develop a computational model of proactivity in the AX Continuous Performance Task (AX-CPT). Third, we develop and test a computational-level theory of meta-control over proactivity in the AX-CPT that identifies three distinct meta-decision-making problems: intention setting, resolving response conflict between intentions and automaticity, and deciding whether to recall context and intentions into working memory. People's response frequencies in the AX-CPT were remarkably well captured by a mixture between the predictions of our models of proactive and reactive control. Empirical data from an experiment varying the incentives and contextual load of an AX-CPT confirmed the predictions of our meta-control model of individual differences in proactivity. Our results suggest that proactivity can be understood in terms of computational models of meta-control. Our model makes additional empirically testable predictions. Future work will extend our models from proactive control in the AX-CPT to proactive goal creation and goal pursuit in the real world.

Toward a formal theory of proactivity DOI Project Page [BibTex]


Toward a formal theory of proactivity DOI Project Page [BibTex]

CoRR, abs/2010.04030, 2020 (article)
Abstract
Representing scenes at the granularity of objects is a prerequisite for scene understanding and decision making. We propose a novel approach for learning multi-object 3D scene representations from images. A recurrent encoder regresses a latent representation of 3D shapes, poses and texture of each object from an input RGB image. The 3D shapes are represented continuously in function-space as signed distance functions (SDF) which we efficiently pre-train from example shapes in a supervised way. By differentiable rendering we then train our model to decompose scenes self-supervised from RGB-D images. Our approach learns to decompose images into the constituent objects of the scene and to infer their shape, pose and texture from a single view. We evaluate the accuracy of our model in inferring the 3D scene layout and demonstrate its generative capabilities. 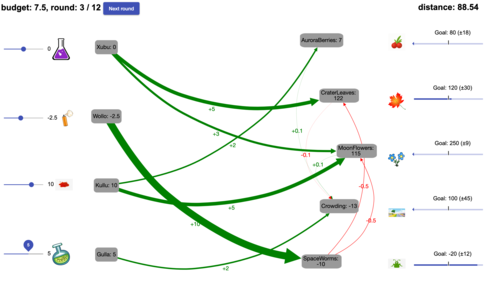 2020 (article)
Abstract
Goal-directed behaviour is a deeply important part of human psychology. People constantly set goals for themselves and pursue them in many domains of life. In this paper, we develop computational models that characterize how humans pursue goals in a complex dynamic environment and test how well they describe human behaviour in an experiment. Our models are motivated by the principle of resource rationality and draw upon psychological insights about people's limited attention and planning capacities. We found that human goal pursuit is qualitatively different and substantially less efficient than optimal goal pursuit. Models of goal pursuit based on the principle of resource rationality captured human behavior better than both a model of optimal goal pursuit and heuristics that are not resource-rational. We conclude that human goal pursuit is jointly shaped by its function, the structure of the environment, and cognitive costs and constraints on human planning and attention. Our findings are an important step toward understanding humans goal pursuit, as cognitive limitations play a crucial role in shaping people's goal-directed behaviour.

IEEE Robotics and Automation Letters (RA-L), 5, 2020, accepted for presentation at IEEE International Conference on Robotics and Automation (ICRA) 2020, to appear, arXiv:1904.06504 (article)
Abstract
Cameras and inertial measurement units are complementary sensors for ego-motion estimation and environment mapping. Their combination makes visual-inertial odometry (VIO) systems more accurate and robust. For globally consistent mapping, however, combining visual and inertial information is not straightforward. To estimate the motion and geometry with a set of images large baselines are required. Because of that, most systems operate on keyframes that have large time intervals between each other. Inertial data on the other hand quickly degrades with the duration of the intervals and after several seconds of integration, it typically contains only little useful information. In this paper, we propose to extract relevant information for visual-inertial mapping from visual-inertial odometry using non-linear factor recovery. We reconstruct a set of non-linear factors that make an optimal approximation of the information on the trajectory accumulated by VIO. To obtain a globally consistent map we combine these factors with loop-closing constraints using bundle adjustment. The VIO factors make the roll and pitch angles of the global map observable, and improve the robustness and the accuracy of the mapping. In experiments on a public benchmark, we demonstrate superior performance of our method over the state-of-the-art approaches.