Designing and Assessing Expressive Open-Source Faces for the Baxter Robot

Using IMU Data to Demonstrate Hand-Clapping Games to a Robot

In Proceedings of the IEEE/RSJ International Conference on Intelligent Robots and Systems, pages: 851 - 856, October 2016, Interactive presentation given by Fitter (inproceedings)

In Proceedings of the IEEE International Conference on Multisensor Fusion and Integration for Intelligent Systems (MFI), pages: 58-65, 2016, Oral presentation given by Burka (inproceedings)

In Proceedings of the IEEE International Symposium on Robot and Human Interactive Communication (RO-MAN), pages: 105-112, 2016 (inproceedings)

In Proceedings of International Congress and Exposition of Noise Control Engineering (INTER-NOISE), Hamburg, Germany, August 2016 (inproceedings)
Abstract
In this paper, a comparison of preliminary design methodologies for optimization of stiffened, fiber-reinforced composite fuselages for vibro-acoustic requirements is presented. Fuselage stiffness properties are modelled using lamination parameters and their effect on the vibro-acoustic performance is investigated using two different approaches. First method, only considers the structural model in order to explore the effect of design variables on fuselage vibrations. The simplified estimation of the acoustic behavior without considering fluid-structure interaction brings certain advantages such as reduced modelling effort and computational cost. In this case, the performance metric is chosen as equivalent radiated power (ERP) which is a well-known criterion in the prediction of structure-born noise. Second method, utilizes coupled vibro-acoustic models to predict the sound pressure levels (SPL) inside the fuselage. ERP is calculated both for bay panels and fuselage section and then compared with the SPL results. The response surfaces of each metric are determined as a function of lamination parameters and their overall difference is quantified. ERP approach proves its merit provided that a sufficiently accurate model is used. The results demonstrate the importance of the simplifications made in the modelling and the selection of analysis approach in vibro-acoustic design of fuselages.

Reproducing a Laser Pointer Dot on a Secondary Projected Screen

In Proceedings of the IEEE International Conference on Advanced Intelligent Mechatronics (AIM), pages: 1645-1650, 2016, Oral presentation given by Hu (inproceedings)

In Proceedings of the ASMO UK International Conference on Numerical Optimisation Methods for Engineering Design, pages: 160–168, Munich, Germany, July 2016 (inproceedings)
Abstract
Eigenfrequency optimization of laminated composite panels is a common engineering problem. This process mostly involves designing stiffness properties of the structure. Optimal results can differ significantly depending on the values of the model parameters and the metrics used for the optimization. Building the know-how on this matter is crucial for choosing the appropriate design methodologies as well as validation and justification of prospective results. In this paper, effects of aspect ratio and boundary conditions on eigenfrequency optimization of composite panels by altering stiffness properties are investigated. Lamination parameters are chosen as design variables which are used in the modeling of stiffness tensors. This technique enables representation of overall stiffness characteristics and provides a convex design space. Fundamental frequency and difference between fundamental and second natural frequencies are maximized as design objectives. Optimization studies incorporating different models and responses are performed. Optimal lamination parameters and response values are provided for each case and the effects of model parameters on the solutions are quantified. The results indicate that trends of the optima change for different aspect ratio ranges and boundary conditions. Moreover, convergence occurs beyond certain critical values of the model parameters which may cause an optimization study to be redundant.

In Proceedings of AIAA/ISSMO Multidisciplinary Analysis and Optimization Conference, Washington, USA, June 2016 (inproceedings)
Abstract
In this paper, a preliminary design methodology for optimization of stiffened, fiber-reinforced composite fuselages for combined mechanical and vibro-acoustic requirements is presented. Laminate stiffness distributions are represented using the method called lamination parameters which is known to provide a convex solution space. Single-objective and multi-objective optimization studies are carried out in order to find optimal stiffness distributions. Performance metrics for acoustical behavior are chosen as maximum fundamental frequency and minimum equivalent radiated power. The mechanical performance metric is chosen as the maximum stiffness. The results show that the presented methodology works effectively and it can be used to improve load-carrying and acoustical performances simultaneously.

Deep Learning for Tactile Understanding From Visual and Haptic Data

In Proceedings of the IEEE International Conference on Robotics and Automation, pages: 536-543, May 2016, Oral presentation given by Gao (inproceedings)

hi Gao, Y., Hendricks, L. A., Kuchenbecker, K. J., Darrell, T. Deep Learning for Tactile Understanding From Visual and Haptic Data In Proceedings of the IEEE International Conference on Robotics and Automation, pages: 536-543, May 2016, Oral presentation given by Gao (inproceedings) 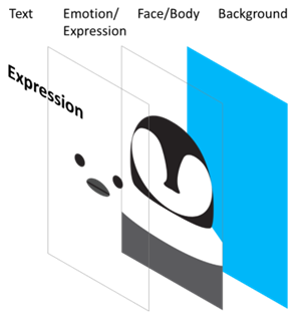 Proceedings of the American Society of Engineering Education, Mid-Atlantic Section, Spring Conference, April 2016 (conference)
Abstract
It is known that children with autism have difficulty with emotional communication. As the population of children with autism increases, it is crucial we create effective therapeutic programs that will improve their communication skills. We present an interactive robotic system that delivers emotional and social behaviors for multi­sensory therapy for children with autism spectrum disorders. Our framework includes emotion­-based robotic gestures and facial expressions, as well as tracking and understanding the child’s responses through Kinect motion capture. 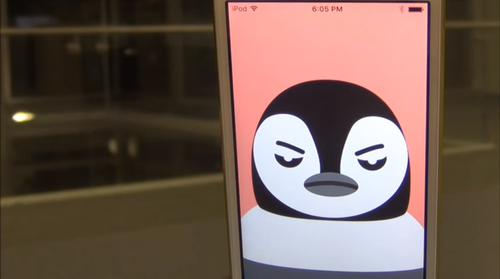 Proceedings of the Eleventh ACM/IEEE International Conference on Human Robot Interaction (HRI), pages: 571-571, March 2016 (conference)
Abstract
In this video submission, we are introduced to two robots, Romo the penguin and Darwin Mini. We have programmed these robots to perform a variety of emotions through facial expression and body language, respectively. We aim to use these robots with children with autism, to demo safe emotional and social responses in various sensory situations.

In Proceedings of the Eleventh ACM/IEEE International Conference on Human Robot Interaction (HRI), pages: 421-422, March 2016 (inproceedings)
Abstract
In this abstract, we present the overarching goal of our interactive robotic framework - to teach emotional and social behavior to children with autism spectrum disorders via multi-sensory therapy. We introduce our robot characters, Romo and Darwin Mini, and the "Five Senses" scenario they will undergo. This sensory game will develop the children's interest, and will model safe and appropriate reactions to typical sensory overload stimuli.

In Haptics: Perception, Devices, Control, and Applications, pages: 354-362, Springer International Publishing, Cham, 2016 (inproceedings)
Abstract
Ultrasonic vibration and electrovibration can modulate the friction between a surface and a sliding finger. The power consumption of these devices is critical to their integration in modern mobile devices such as smartphones. This paper presents a simple control solution to reduce up to 68.8 {\%} this power consumption by taking advantage of the human perception limits. 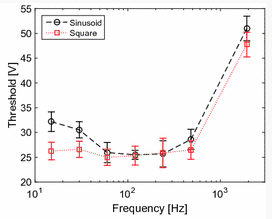 Effect of Waveform in Haptic Perception of Electrovibration on Touchscreens

In Haptics: Perception, Devices, Control, and Applications, pages: 190-203, Springer International Publishing, Cham, 2016 (inproceedings)
Abstract
The perceived intensity of electrovibration can be altered by modulating the amplitude, frequency, and waveform of the input voltage signal applied to the conductive layer of a touchscreen. Even though the effect of the first two has been already investigated for sinusoidal signals, we are not aware of any detailed study investigating the effect of the waveform on our haptic perception in the domain of electrovibration. This paper investigates how input voltage waveform affects our haptic perception of electrovibration on touchscreens. We conducted absolute detection experiments using square wave and sinusoidal input signals at seven fundamental frequencies (15, 30, 60, 120, 240, 480 and 1920 Hz). Experimental results depicted the well-known U-shaped tactile sensitivity across frequencies. However, the sensory thresholds were lower for the square wave than the sinusoidal wave at fundamental frequencies less than 60 Hz while they were similar at higher frequencies. Using an equivalent circuit model of a finger-touchscreen system, we show that the sensation difference between the waveforms at low fundamental frequencies can be explained by frequency-dependent electrical properties of human skin and the differential sensitivity of mechanoreceptor channels to individual frequency components in the electrostatic force. As a matter of fact, when the electrostatic force waveforms are analyzed in the frequency domain based on human vibrotactile sensitivity data from the literature [15], the electrovibration stimuli caused by square-wave input signals at all the tested frequencies in this study are found to be detected by the Pacinian psychophysical channel.

In Proc. of the German Conference on Pattern Recognition (GCPR), 2016 (inproceedings)

Image-Enabled Force Feedback for Robotic Teleoperation of a Flexible Tool

The AirWand: Design and Characterization of a Large-Workspace Haptic Device

In Proc. IEEE International Conference on Robotics and Automation, pages: 1461-1466, Kobe, Japan, May 2009, Oral presentation given by \uline{Romano} (inproceedings)

Dynamaid, an Anthropomorphic Robot for Research on Domestic Service Applications

THUMP: An Immersive Haptic Console for Surgical Simulation and Training