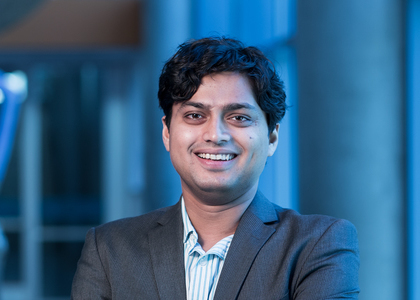 Aamir Ahmad appointed Tenure-Track Professor at the University of Stuttgart

The leader of the Perceiving Systems Department’s Robot Perception Group is joining the university’s Faculty of Aerospace Engineering and Geodesy effective September 1, 2020.

Ahmad will be adding robotics and AI to the aerospace faculty's fields of research.

Tübingen – Aamir Ahmad, a research scientist and group leader in Michael Black’s Perceiving Systems Department at the Max Planck Institute for Intelligent Systems (MPI-IS) in Tübingen, has accepted a tenure-track professorship at the University of Stuttgart. From September 1, 2020, he will become the university’s first Professor of Flight Robotics at the Faculty of Aerospace Engineering and Geodesy.

“I am very pleased to be taking on this new challenge,” says Ahmad, who will be teaching Advanced Estimation for Flight Robotics. “I am grateful that Michael Black gave me the opportunity to drive my research on vision-based multiple aerial systems forward over the past three years. MPI-IS has been an excellent springboard for the next step in my career. I am now eager to add robotics and AI to the aerospace faculty’s fields of research at the University of Stuttgart.”

Since 2016, Ahmad has led the Robot Perception Group at MPI-IS in Tübingen. The group’s research focuses on vision-based perception in multi-robot systems, particularly aerial robots, with the aim of gaining a better understanding of how teams of robots navigate, cooperate, and communicate with one another.

Over the course of the AirCap project, for instance, Ahmad has led his group of researchers in conceptualizing and developing a team of micro-aerial vehicles (MAVs) for markerless and outdoor human motion capture (MoCap). The system, which comprises multiple cooperating aerial robots, is the first that is capable of autonomously detecting, tracking, and following a person in a natural outdoor environment without the use of sensors or markers. Thanks to the MAVs’ onboard cameras and the system’s state-of-the-art back end, a human subject’s 4D skeletal pose and body shape can be reconstructed with a high level of accuracy. Such systems show great promise for application in a broad range of areas, among them search and rescue operations, wildlife conservation, agriculture, and construction safety monitoring.

An award-winning scientist and leading young researcher in the field of flight robotics, in 2013 Ahmad received the Marie Curie Intra-European Fellowship, one of the world’s most competitive academic fellowships. Prior to joining MPI-IS, Ahmad worked as a postdoctoral researcher at the Max Planck Institute for Biological Cybernetics in Tübingen. He was also a postdoctoral fellow at the University of Lisbon’s Institute for Systems and Robotics, where he completed his PhD in Electrical and Computer Engineering.  Ahmad also holds a Bachelor of Technology in Civil Engineering from the Indian Institute of Technology (IIT) in Kharagpur, India.

In addition to his teaching and research activities at the University of Stuttgart, Ahmad will continue to lead the Robot Perception Group’s research projects at MPI-IS. He also plans on co-supervising PhD students for the International Max Planck Research School for Intelligent Systems (IMPRS-IS).